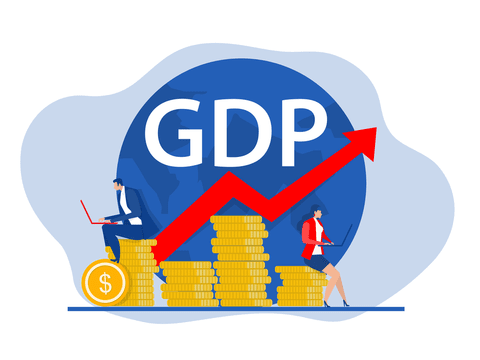 India’s GDP growth surged to 13.5 percent in April-June from 4.1 percent the previous quarter, data released on August 31 by the Ministry of Statistics and Programme Implementation showed.

The sharp uptick in growth was driven by a favourable base effect and the ongoing economic revival.

The Indian economy grew slower than anticipated last quarter, with economists predicting growth would come in at 15 percent, as per a Moneycontrol poll.

However, at 13.5 percent, the April-June GDP growth rate is second-highest India has ever clocked, although comparable quarterly GDP data is available going back only till 2012. The only time growth has been higher was in April-June 2021, when the economy had expanded by a record 20.1 percent due to an extremely strong base effect.

While the latest quarterly growth number missed estimates – 13 of the 15 economists polled by Moneycontrol had said growth would be 14 percent or higher – some of the underlying numbers surprised on the upside. Chief among these was the agriculture sector, whose gross value added (GVA) increased by 4.5 percent in April-June. This growth rate is not only higher than what was posted in January-March but more than twice as fast as in the year-ago period.Economists had seen farm sector growth slowing down last quarter on account of an unusually hot summer, which hurt crop yields.

While the other sectors also posted smart year-on-year increases, they were polished by the favourable base effect.The GVA growth for mining and quarrying was only 6.5 percent, seemingly reflecting the impact of the high global commodity prices over the last few months. Manufacturing growth, meanwhile, was 4.8 percent after having contracted by 0.2 percent in January-March.

However, close-contact services witnessed a rebound, as was expected, with the Omicron variant-led third wave of the coronavirus pandemic limited to the first quarter of 2022. In the second quarter, data released today showed, that the ‘Trade, Hotels, Transport, Communication & Services related to broadcasting’ industry saw its GVA jump by 25.7 percent compared to an increase of 5.3 percent in January-March.

The overall GVA growth was 12.7 percent for April-June.

The disappointing GDP growth number means that even if the RBI’s forecasts for the subsequent three-quarters of FY23 are met, the central bank’s full-year forecast of 7.2 percent will be missed by more than 20 basis points.The RBI expects India’s GDP to grow 6.2 percent, 4.1 percent, and 4.0 percent in the final three quarters of the current financial year.