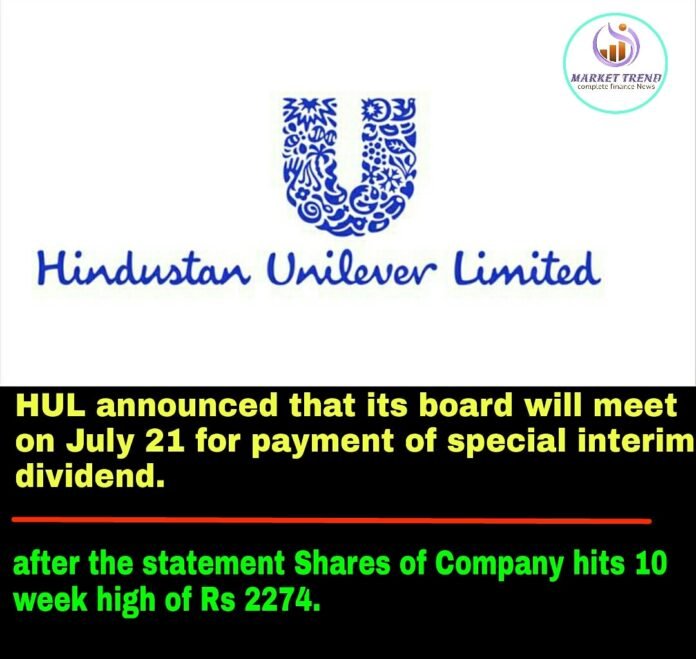 Shares of Hindustan Unilever (HUL) hit an over 10-week high of Rs 2,274, up 2 per cent on the BSE on Monday after the company announced that its board will meet on July 21 to consider special interim dividend. The stock of the fast-moving consumer goods (FMCG) giant has gained nearly 5 per cent in the past two trading days. It was trading at its highest level since April 30, 2020.

“A meeting of the board of directors of the Company will be held on July 21, 2020, through audio-visual to consider the proposal for payment of interim (special) dividend, if any, for the financial year ending March 31, 2021 (FY21),” HUL said in an exchange filing.

The board will also consider the financial results for the quarter ended June 30, 2020 (Q1) along with the limited review report of the auditors for the corresponding period, it said.

According to analysts, for the April-June quarter (Q1FY21), HUL is likely to witness a revenue decline of 2.4 per cent (including acquired company’s sales). Though the company was able to start manufacturing in mid-April, it only reached the previous year’s levels by June 2020.

“However, we believe HUL would have been able to refill the inventory at the distributor level by the end of June 2020, which would have absorbed some of the lost sales in April & May. On the demand front, we believe personal care (cosmetics) & ice-creams would have been severely impacted with a near washout quarter for both categories. However, soaps, sanitisers would have seen strong growth induced by increased consumer awareness about hygiene,” ICICI Securities said in result preview.

The brokerage firm expects 12 per cent and 13 per cent revenue decline in the home care & BPC (beauty & personal care) categories, respectively. With benign raw material cost, reduction in A&P spends and other cost-cutting measures, it expects the company to maintain operating margins at 26.5 per cent (35 bps higher). PAT is likely to grow 7.9 per cent aided by profits from GSK acquisition and lower income tax, it said.